Early users of Tesla’s electric automobiles were likely recognized for their vision and desire to change the transportation landscape. As electric vehicles grow increasingly prevalent, Tesla owners appear to be seeking for more radical ways to distinguish themselves from the crowd, such as implanting their keys in their hands, according to a Gizmodo story.

There is no blood in this film, but at the beginning of the video, a chip is surgically implanted within the hand of a guy.
The concept of incorporating something that will benefit your body is not novel. People have been having surgical operations for many years to put into things as finicky as magnets for momentary advantages, a practice known as bio-hacking.

Elon Musk’s biotechnology business Neuralink operates in the same way, promising to connect the human brain to a computer chip and perform tasks simply by thinking. It’s a different tale that its technology hasn’t advanced as swiftly as it could.

Tesla keys implanted in your hand
The Tesla keys in the video above are nothing more than versatile NFC chips. This technology enables devices to interact and perform in close proximity to one another. Brandon Dalaly, who appears to be a body modification aficionado in addition to being a Tesla owner, received the keys. According to Gizmodo’s article.

Brandon, however, is not the first individual to have such a treatment. Amie DD, a software developer, documented her biohacking tale in 2019, and one of her exploits was the key to her Tesla Model 3. Amie revealed her implant in a YouTube video that included a lot of blood.
It also helped that Amie was working at Vivokey at the time, which was working to make the NFC chip implantable. While this may sound complicated, it was simply encasing the chip in a bio-safe polymer before implanting it.
Adapting to the times
Tesla’s keys have also evolved over time. The NFC tags are now required to operate the car as well as open the doors. Tesla employs Java Card software to protect communications between the wallet-style key and the EV.

This forced Vivokey to go back to the drawing board and redesign its implant from an NFC chip to something capable of running software. It was successful, as evidenced by the Vivokey Apex that was put in Brandon’s hand. Brandon is seen at the end of the video waving his hand to communicate with his Tesla. The Vivokey Apex will be manufactured soon. 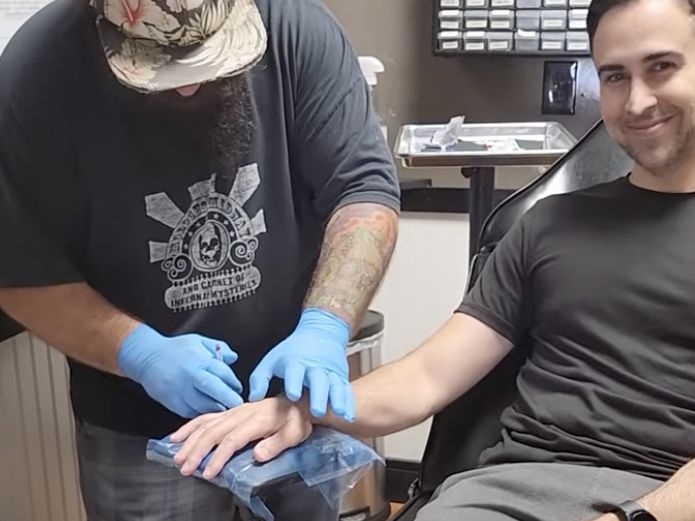 The world has been divided by bio-hacking. While some find it useful and cool, others question its long-term utility. Such a hack ensures that you will never forget your keys. But what happens if the chip fails or you change cars?

I guess we’ll need a chip to control them all. Are there any takers for this project?