Chinese researchers appear to have created a novel “flying” unmanned submarine drone, according to recent maritime combat news. The possibility that the new drone would be one of the simplest, most efficient ways to compromise an aircraft carrier fleet’s security system has only so far been reported in Chinese news media.

A research team in eastern China says it has created and tested a prototype submarine drone that can fly quickly through the air. The autonomous watercraft, in the opinion of topic experts, is capable of carrying out both military and civilian functions, such as inspecting underwater mines.
The drone has four propellers, including two in the front that tilt, and can move slowly toward an underwater target while remaining still for a long period.

Two large wings that fold over the drone’s back can extend when it is near the water’s surface, allowing it to fly at a speed of 74.6 mph (120 kph), which is about twice as fast as a normal drone driven by rotor blades.

In a paper published in the peer-reviewed Unmanned Systems Technology in June, professor Ang Haisong, a lead project scientist with the Nanjing University of Aeronautics and Astronautics, stated that the drone “consumes little energy when cruising in fixed-wing mode, so it can perform some fast, long-range missions in the air.”

According to a researcher working on a related project at Northwestern Polytechnical University in Xian, Shaanxi province, China is creating a variety of “transmedia boats” that can move between the air and the water.

They are mostly used for military purposes. According to the researcher who declined to be identified, some are capable of supersonic flight. This researcher asked to remain anonymous due to the sensitivity of the technology even though she was not participating in Ang’s work. 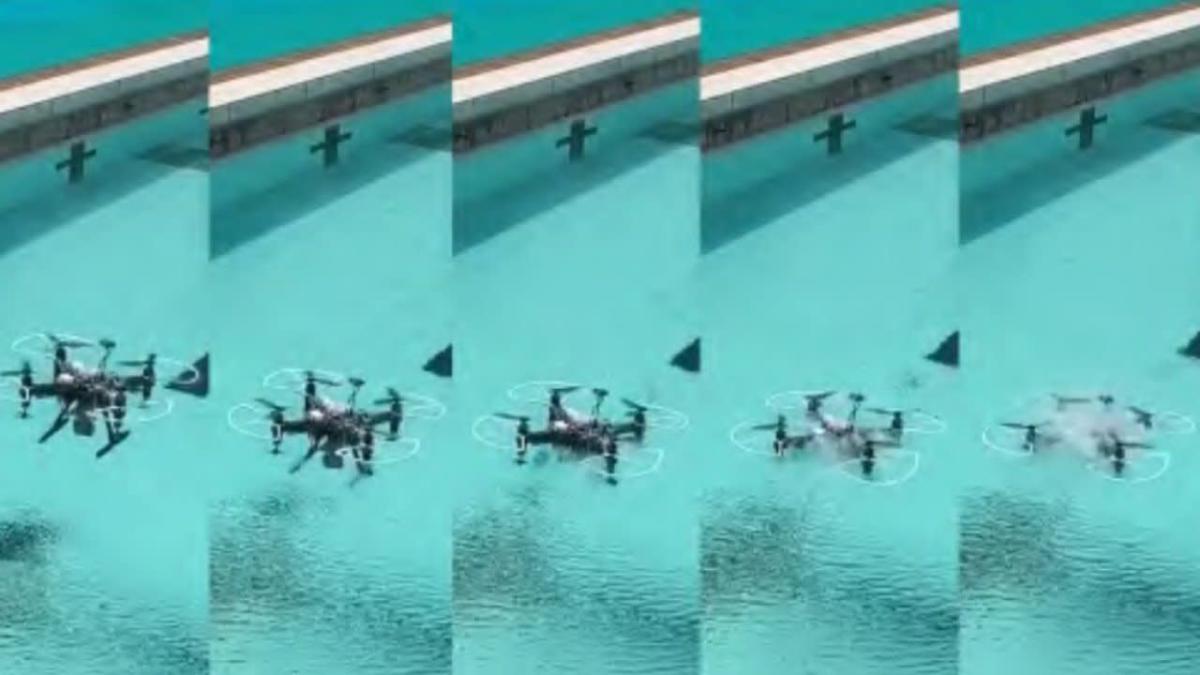 If true, such a vessel might render surface fleets extremely attackable.
Ji Wanfeng, a professor at Yantai’s Naval Aviation University in Shandong province, claims that this type of “transmedia vessel” is one of the simplest and most effective ways to breach an aircraft carrier fleet’s defenses.
Ji and his colleagues estimate that a modern warship’s multilayered defense system can destroy about half of the incoming planes, missiles, or conventional drones. However, they clarify, a “transmedia vessel” has the capacity to dive beneath the surface in response to radar detection and surface again to evade sonar.

Ji warned that even a few of these drones could confuse or overload a warship’s computer systems.

When launched from a distance of 62 miles, a transmedia vessel with a top speed of more than 93 mph (150 kph) would have a survival probability that was close to 100%, according to research Ji’s team published in the Chinese journal Electronics Optics & Control last month (100km).

The primary targets of the enemy can be effectively attacked by this kind of drone. It will undoubtedly develop into a potent complement to the Chinese navy’s current weaponry, combat strategies, and tactics, according to Ji’s report.

The flying submarine developed by Ang’s team has an airbag in its belly that can be filled with water to varying buoyancy, enabling it to maintain a particular depth without making noise with its propellers. When its wings are folded and it is moving through the water, its sleek body, which resembles a typical submarine, allows for reduced drag and greater maneuverability.

According to Ang’s team, if the vessel rises straight out of the water, surface waves and the drone’s simultaneous interactions with air and water make the takeoff procedure unstable.

They developed an advanced control system that allows the submarine to glide on the waves before lifting to fix this.

In the 1920s, a Soviet engineering student named Boris Ushakov created a submersible plane that could spy on ships before plunging beneath the water and surprising them with torpedoes. However, the Red Army gave up on the proposal because the subsea parts made the aircraft too heavy.

Donald Reid, an American defense contractor, developed the first flying submarine in the 1960s, although it could only hover for a brief time due to insufficient power.

Several research initiatives to develop manned or unmanned underwater planes for covert operations have reportedly received funding from the US military, however, the majority of these programs have been delayed due to technological challenges.